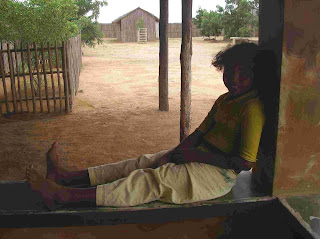 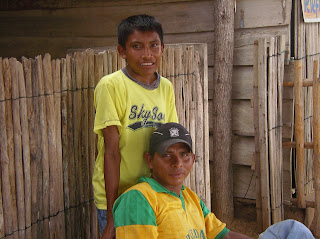 Cabo de la Vela was very pretty but rolly so we didn't get as much rest as we needed the first night but the second night it was calm and flat and we all got a good night's sleep. On the day in between we landed the dinghy nearby and walked up to the light station - nice views down the coast. The nearby village had a small store where we got some cold beers afterwards and talked to the owner and her grandchildren. There were only a few shelves of canned goods and candy for sale but several bottles of Heinz ketchup surprisingly. 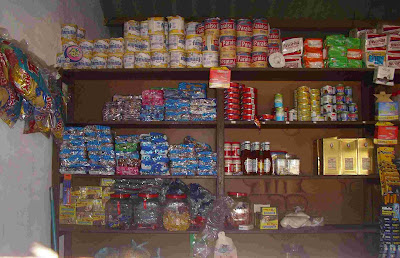 The village appeared to have been built all at one time. We wonder if the old one was destroyed by a storm. The houses were mostly the same and someone had planted new trees, two in front of each building, all surrounded by a fence to keep them safe from the goats and sheep. It was very neat and tidy. Further away across the bay is the tourist area with a number of small restaurants and cottages. We didn't do any snorkeling as there were a number of jelly fish around but managed to duck them for swims around the boat. The second day the three French boats showed up and told us that they'd had a hard time the night after we left. A sudden squall hit Monjes in the night with winds up to 50 knots. A gust blew the little house at the end of the dock to pieces and both they and the fishing boats scrambled to get out of there. It must have been a mad house! Tom had a really hard time getting his bow line off the anchoring line when we left. Most people have to tie several lines together to get the length needed to go through the loop and back to your boat. He had to pull the boat up to one of the knots as something had caught and stopped the line from pulling through. If that had happened the next night he would have had to cut himself free and lost the 200 feet of line. Our next leg was an overnight so all of us left in the afternoon for a 125 mile passage.
Posted by Scott Garren and Heather Shay at 12:08 PM

Email ThisBlogThis!Share to TwitterShare to FacebookShare to Pinterest
Labels: Columbia