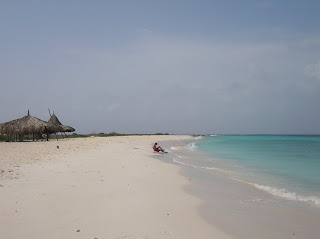 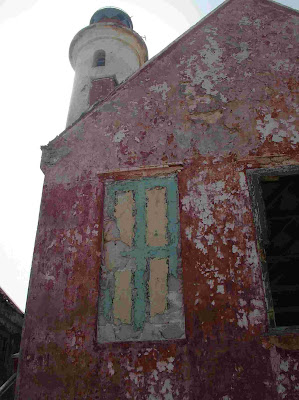 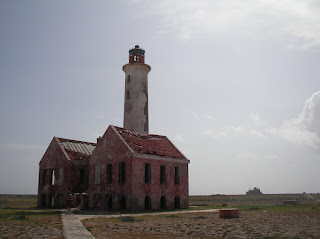 "Scott Free" has visited Klein Curacao twice now, once on the way back from Bonaire to Curacao with Sean and Sarah and again while returning to Bonaire with Scott's brother Brent and his wife Wilma. We picked up a mooring off the beautiful white beach and spent one night each time. This small flat island, one and one half miles long and just under one half mile across, is southeast of Curacao and is unpopulated. The skyline has three prominent features, a beautiful lighthouse and two wrecks, one of an old freighter (seen in the distance in the photo above left and in detail below) and the other a once lovely sailboat, only recently tossed up on this reef. 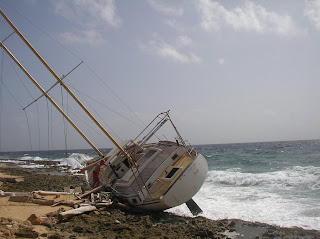 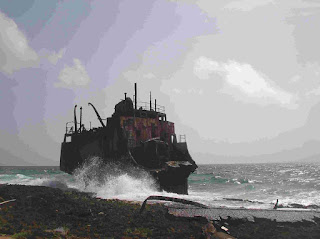 Several day boats bring visitors to the island but they are all gone by 4 PM so we had the island to ourselves. There are five substantial moorings installed and we were told to use these rather than risk damaging the coral by anchoring (our guide book did say it was possible to anchor in 12 - 20 feet in the sand south of the moorings). We snorkeled our mooring and it was strong enough for a boat much bigger than ours, in fact it was labeled "Insulinde", a large sailing ship often tied up at the dock in downtown Williamsted. We walked the beach and on paths over the island and enjoyed the solitude that night. With no lights at all on the island (the lighthouse is no longer working), the stars were really spectacular.

On the North Eastern point is a deserted Phosphate mine which was used in washing powders and was exported. It was closed in 1918 with the building of the oil refinery in Curacao. The beach houses and fishing shacks at the beginning of the path to the lighthouse are the remains of the mining village.

The trip from Bonaire is generally a fast downwind sail of about 27 miles and onward to Curacao is equally easy. Getting back from Curacao is more challenging. We had a hard directly upwind slog into choppy waves on the 13 mile trip from Spanish Waters to Klein Curacao. The next day we luckily had a close reach the whole way to Bonaire. But the stop at Klein really breaks up the upwind trip to Bonaire and is so lovely on it's own.
Posted by Scott Garren and Heather Shay at 4:54 PM