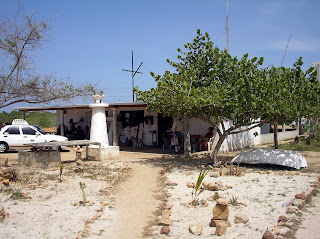 This first picture shows the "offices" of Marina Juan, the gentleman who arranges things for cruisers on Margarita and the general hanging out spot for many of the semi permenant boat crew. We left Porlamar at 4 AM in the pitch black. It is quite disconcerting to sail without being able to distinguish the horizon. Luckily a sliver of a moon came out behind the headland and helped. Scott stood in the bow until we were well off shore. Over the next two hours we saw 30 to 40 fisherman's pirogues pass us, all without lights. By 5:30 AM the sky began to lighten and we enjoyed a fast trip up the east coast of Margarita Island with a positive current. There was almost no wind and this continued, much to our surprise, all day. We had the 5 to 6 foot rollers right on our beam so the boat moved around a lot but otherwise it was a lovely day, clear and calm. About an hour away from the island we were stopped by a Venezuelan patrol boat and they questioned Scott on the VHF radio for about ten minutes. Most of the time was due to the language barrier but Scott did great. We had not checked into the country and were flying a Q flag so we were rather nervous. We explained that the reason we were so delayed in heading west was problems with our transmission coupler (thank you "Spanish for Cruisers") and they accepted that and left us. Whew! We passed through a enormous cloud of jelly fish, each 12 - 18 inches wide, for fifteen minutes. White birds in a line skimmed less than a foot above the water never losing formation. Scot caught two mahi mahi at the same time and it was a big challenge! He brought the first one in and had almost gaffed it when it jumped up and escaped. He got the other one all the way up on the deck but it too flipped off. Both were over two feet long. Around 3:30 ghostly Los Hermandos islands came into view shimmering in the heat and the light fog, followed by Blanquilla. Just then another fish bit and we had a small tuna successfully on board.
We anchored off the two palm trees on the southwest side. Doyle's guide has a sketch map of the anchorage with these trees on the beach and there they were, looking oddly out of place but charming. Much to our delight, "Angel", the Canadian boat we had met in Los Testigos was one of the three boats there. They welcomed us and invited us over for drinks the next night. How marvelous after the long day to have a cold drink and a great dinner. 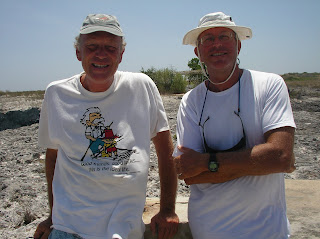 The next few days we explored this lovely island. Blanquilla has a small fishing community on the south side and the rest of the island is cactus, white beaches, rock and coral. The snorkeling was the best we've seen. One day Dave and Val on Angel and ourselves dinghied up the west coast to Playa Americano where the ruins of a beach house built years ago by a eccentric American cap a rock arch framing the deep white beach lined cove. Luckily the waves were quite mild, allowing us to snorkel all around the rocks lining the bay. We saw deep drop offs and canyons lined with coral and teaming with fish through the crystal clear water. On one side we explored a deep cave carved into the limestone cliff. 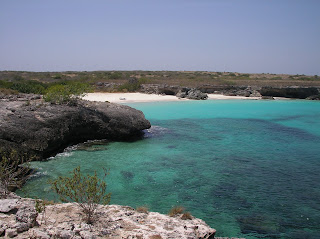 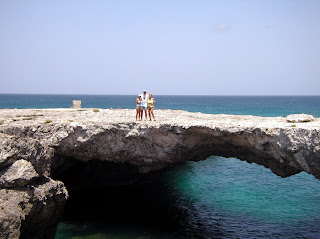 Val lent us a books on fish behavior and identification and it made observation more interesting and understandable. Each species has many guises; juvenile, male, female and during the spawning or egg protection phases. Some very different looking fish are the same species.
Another day Scott and I walked the shore and found the imprint of a big leatherback turtle that had come up during the night and laid her eggs. The whole story was left undisturbed as a pattern in the sand. Later we saw four or five small needle fish surrounding a large leaf floating in the water. One at a time they lined up with the leaf and jumped over it, sliding along it's surface like the plastic slides wet with a hose our kids played on. They were still going at it when we continued down the beach. The land is covered with flowering cactus, several species of which we usually see in pots in the nursery. Sturdy shoes were needed to leave the beach.
Three nights were all we could spare unfortunately. Angel and ourselves have decided to buddy boat to Bonaire, much to our delight!
Posted by Scott Garren and Heather Shay at 11:14 AM