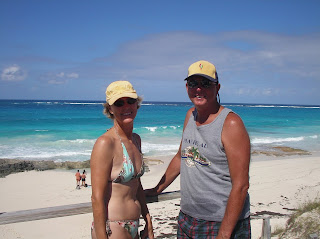 We met a number of terrific cruising couples on our trip to the Bahamas but three of them remained friends over the next years. Doug and Sandy (left) on "Interlude" we met at Green Turtle Key and cruised with this year and next in the Bahamas. We met again our friends from the Annapolis Boat Show, Roger and Francoise (below right and in the center below left) 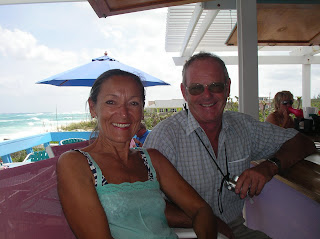 on "Starship Annie" and had some wonderful times here in the Bahamas and then later down the island chain for several years to come. The third couple are Bill and Jeannette on "Myasotis" (below left on the right and left) who we met here and have visited back and forth at their home and ours. They sold this "Myasotis" and have since bought another one. 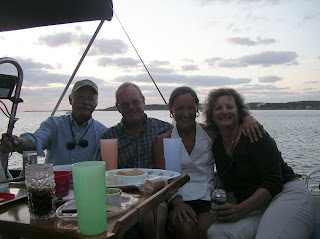 We went around Whale Cay Cut with "Interlude" and anchored in Baker's Bay off the now deserted Disney Cruise Ship playground. This was a beach/bar "Pirate Lair" set up for their cruise ships but proved too difficult for them to access in all but calm weather. It was fun to explore here and enjoy the deserted beach and the atmospheric "movie set". 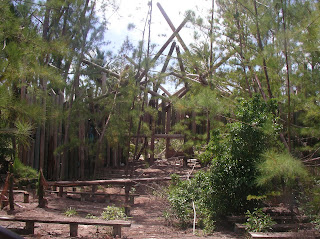 Next day we anchored at Fisher's Bay and had a miserable time getting the anchor to set. A helpful cruiser suggested laying much more chain to get a horizontal pull and that worked. Immediately we headed over to "Nippers", to this day the coolest beach bar we've ever seen. Multi color pastel chairs and tables on a big deck overlook a 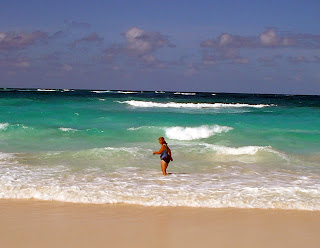 perfect white sand beach. Two small pools are linked by a little waterfall and the BBQ is served at lunch and dinner. Of course the drinks were tall and fruity and often contained coconut cream. Painkillers, first tried in Annapolis at the Boat Show, are our favorite. Heaven! We swam in the pool and in the ocean. We drank and we ate - and laughed a lot! It was our imagined Caribbean destination to a "T". 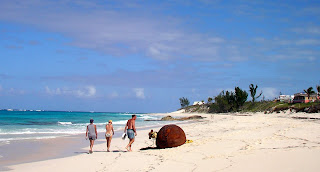 That night we ate a great meal at the "Blue Water Grill" with Doug & Sandy. The next day we headed for Man-O-War Cay and hit a rock trying to anchor - no damage visable thank goodness. The north end of Diskie's Cay was a better spot. Man-O-War Cay is another lovely community with a number of art/crafts galleries. They 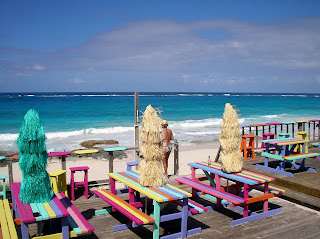 make baggage/pocketbooks of all sides and colors in quilt like patterns. We bought several for gifts. Woodworkers make boat models and half models that command some big prices. My Dad made these years ago of individual boats for sail racing trophies and proud owners. They were beautiful and so are these. 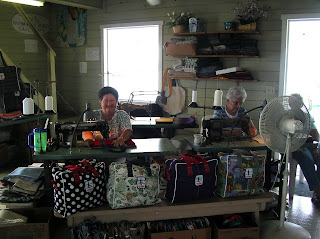 We had a fun time shopping followed by drinks on Interlude that night. Coming back in the dark we didn't tie the dinghy securely for the night. Each probably thought the other would do it. Of course those drinks might have been the culprit. In any case 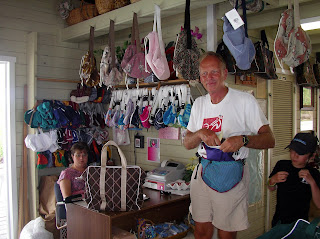 the next morning it was gone! We had just watched "Interlude" pull anchor and head off back towards the U.S. but a frantic call on the VHF radio brought them back. Sandy stayed with the boat while Doug launched their dinghy and picked Scott up for a search. Luckily it wasn't too far away, bumping around on the coral and rocks. Our "Port-a-boat" is made of indistructable material so it survived. An inflatable proably would have had severe damage. 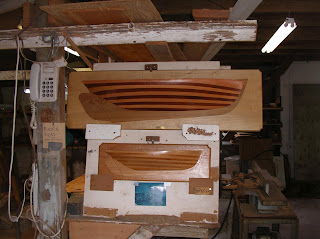 indistructable material so it survived. An inflatable proably would have had severe damage. We thanked our rescuerers profusely and then we headed off in different directions. Our next destination was Marsh Harbour. The wind was fresh and the waves choppy on the way and the harbor, very shallow and crowded. It was a challenge to find a good spot.
Posted by Scott Garren and Heather Shay at 5:00 PM

Email ThisBlogThis!Share to TwitterShare to FacebookShare to Pinterest
Labels: Bahamas