Yes we're still alive and on "Scott Free", now in Brunswick, Georgia. We arrived Thursday, November 11 towed by Boat U.S. We had just finished a nervous transit of the shallow Buttermilk Sound around red marker "222" when Scott put his head up from below and said:
"There's a fire in the engine room!"
I put the throttle in neutral. He shut off the engine. We threw down the anchor. No one screamed. While I called our buddy boat "Sea Angel" just ahead of us. Scott went below to try and find out what was happening. Ed suggested I call the Coast Guard but I wanted to wait until we knew more. They anchored just ahead of us and stood by.
Scott came up coughing. "It's only smoke - no flames."
Good news! We opened all the windows and hatches to clear out the smoke and Scott was able to see enough to diagnose the problem. The transmission seal had broken and transmission oil was all over the bilge. It had sprayed on the hot engine and caused the smoke.
We called Boat U.S. and requested a tow. It took over two hours to get to us and another four hours to tow us into Brunswick Landing Marina. Only one man was on the tow boat making the process much more difficult.
Our wonderful friends on "Sea Angel" couldn't really do anything at this point to help so we urged them to go ahead and keep on their schedule. We'll see them again in January in Florida when we return.
At first we were on a line behind the tow boat and needed to steer carefully at all times, especially under the bridges. Then, nearer the Marina, we put down an anchor. He carefully came up alongside and we tied our boats together tightly and we steered for both boats. His boat became our engine. We went very slow! It was almost 7 PM and dark by the time we inched our way into the slip. It was an unbelievable relief to tie up!
So we never made it to Florida. We'll be leaving the boat here and flying back to Boston and Vermont from Jacksonville, FL (only 62 mile away) for Thanksgiving and Christmas.
The transmission is being pulled tomorrow morning and will be sent away to be rebuilt. While we're away it will hopefully be reinstalled and ready when we return January 1, 2011.
The Brunswick Landing Marina is a favorite spot of ours, so we're not suffering.
So that's our situation right now! How did we get here and what have we been doing since our last blog so long ago. My plans are to bring you up to date in the next few blog entries, starting at the beginning. Thanks for being patient! 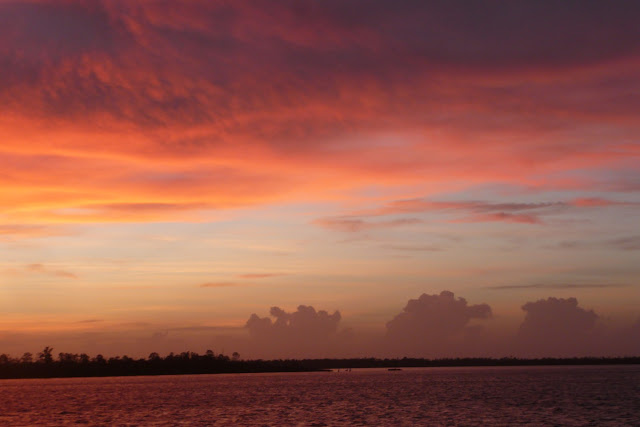 Posted by Scott Garren and Heather Shay at 1:50 PM

Email ThisBlogThis!Share to TwitterShare to FacebookShare to Pinterest
Labels: Georgia