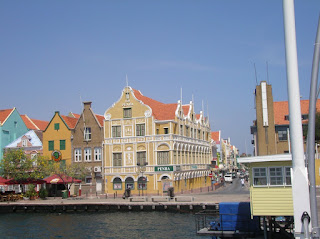 Curacao is the largest and most populated of the ABCs. It covers 171 square miles and 134,000 inhabitants. It was claimed for the Spanish by Alonso de Ojeda in 1499 and occupied by the Dutch in 1634. It's natural large protected harbour made it a center for the slave trade until slavery was abolished in 1863. Affluence from this thriving business built the beautiful architecture of Willemstad, a mixture of Dutch and Spanish styles. It is a UNESCO world heritage site and very lovely. 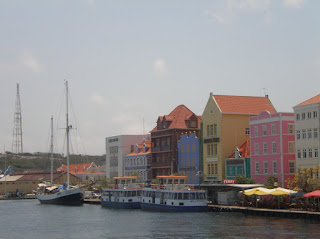 In 1914 oil was dicovered at Maracaibo Basin and the Royal Dutch Shell built a large oil refinery in Curacao, this was turned over to the local government in the mid 1980s and now is leased to Venezuela. The oil developement caused serious descrepancies among the social groups on the island resulting in large scale rioting and protests in May of 1969. This resulted in more control over the political process by the majority Afro-Caribbean populace.

Tourism is becoming more important and big hotel developments are evident. Our marina is part of a combination hotel/condo/private home complex. At this point only the marina and some private homes are finished (very expensive ones). We're located at the end of a long private road and traveling to the city takes some planning. We caught a ride with one of our cuiser friends into the city and took the local bus back to the gate house. There we waited until a security guard came to drive us down to the marina. 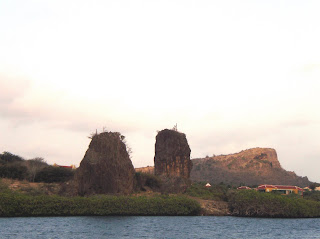 This image on the right and some in the previous blog entry were taken around the marina and show the semi-arid vegetation and table topped hills that reminded us of the US southwest. The remaining lumps of other hills, worn down by occasional downpours and wind litter the area. The sunrise from our boat on our first morning here was really lovely. 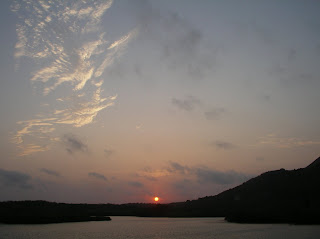 Posted by Scott Garren and Heather Shay at 3:37 PM